Hey y’all I have a bunch of new books to read for the month of August. My choices are kind of all over the place this month. I guess that’s what happens when you enter a book. store to pick up something for somebody else and get lost in the sales! Anyway, here’s what I chose:

The Darkest Minds : By Alexandra Bracken

When Ruby woke up on her tenth birthday, something about her had changed. Something frightening enough to make her parents lock her in the garage and call the police. Something that got her sent to Thurmond, a brutal government “rehabilitation camp.” She might have survived the mysterious disease that had killed most of America’s children, but she and the others emerged with something far worse: frightening abilities they could not control. Now sixteen, Ruby is one of the dangerous ones. When the truth comes out, Ruby barely escapes Thurmond with her life. She is on the run, desperate to find the only safe haven left for kids like her—East River. She joins a group of kids who have escaped their own camp. Liam, their brave leader, is falling hard for Ruby. But no matter how much she aches for him, Ruby can’t risk getting close. Not after what happened to her parents. When they arrive at East River, nothing is as it seems, least of all its mysterious leader. But there are other forces at work, people who will stop at nothing to use Ruby in their fight against the government. Ruby will be faced with a terrible choice, one that may mean giving up her only chance at having a life worth living.

To be honest I hadn’t heard anything about this book ( which is actually Book one in a series) until I saw the trailer for the movie that comes out this month. It reminded me of a Hunger Games/ Divergent dystopian YA fiction that I absolutely love. The trailer totally captivated me and I always have to read the book before I watch the movie, so I picked this one up…. all 488 pages worth (LOL) I’m 2 chapters in and already sold so it shouldn’t be too hard to breeze through . Wish me luck!

Crazy Rich Asians is the outrageously funny debut novel about three super-rich, pedigreed Chinese families and the gossip, backbiting, and scheming that occurs when the heir to one of the most massive fortunes in Asia brings home his ABC (American-born Chinese) girlfriend to the wedding of the season.
When Rachel Chu agrees to spend the summer in Singapore with her boyfriend, Nicholas Young, she envisions a humble family home, long drives to explore the island, and quality time with the man she might one day marry. What she doesn’t know is that Nick’s family home happens to look like a palace, that she’ll ride in more private planes than cars, and that with one of Asia’s most eligible bachelors on her arm, Rachel might as well have a target on her back. Initiated into a world of dynastic splendor beyond imagination, Rachel meets Astrid, the It Girl of Singapore society; Eddie, whose family practically lives in the pages of the Hong Kong socialite magazines; and Eleanor, Nick’s formidable mother, a woman who has very strong feelings about who her son should–and should not–marry. Uproarious, addictive, and filled with jaw-dropping opulence, Crazy Rich Asians is an insider’s look at the Asian JetSet; a perfect depiction of the clash between old money and new money; between Overseas Chinese and Mainland Chinese; and a fabulous novel about what it means to be young, in love, and gloriously, crazilyrich.

I have honestly been avoiding reading these books for years. I used read books by. this author K’wan and every single time I would look up his books, Kevin K’wan would pop up. So, because that irritated me, I ignored every suggestion to read this book. Then, I saw the movie trailer for this book, ( I sense a trend here) and was totally intrigued. Like I mentioned previously, I like to read the book before I see the movie so I’m hoping to breeze through this one quickly as this movie comes out this month as well.

An instant New York Times bestseller! Charlamagne Tha God—the self-proclaimed “Prince of Pissing People Off,” cohost of Power 105.1’s The Breakfast Club, and “the most important voice in hip-hop”—shares his eight principles for unlocking your God-given privilege.

In Black Privilege, Charlamagne presents his often controversial and always brutally honest insights on how living an authentic life is the quickest path to success. This journey to truth begins in the small town of Moncks Corner, South Carolina, and leads to New York and headline-grabbing interviews and insights from celebrities like Kanye West, Kevin Hart, Malcolm Gladwell, Lena Dunham, Jay Z, and Hillary Clinton.

Black Privilege lays out all the great wisdom Charlamagne’s been given from many mentors, and tells the uncensored story of how he turned around his troubled early life by owning his (many) mistakes and refusing to give up on his dreams, even after his controversial opinions got him fired from several on-air jobs. These life-learned principles include:

-There are no losses in life, only lessons
-Give people the credit they deserve for being stupid—starting with yourself
-It’s not the size of the pond but the hustle in the fish
-When you live your truth, no one can use it against you
-We all have privilege, we just need to access it

By combining his own story with bold advice and his signature commitment to honesty no matter the cost, Charlamagne hopes Black Privilege will empower you to live your own truth 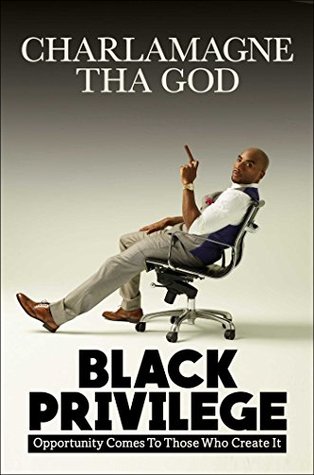 Charlamagne is the brash, unapologetic , crude co anchor of the Breakfast Club on Power 105.1 FM New York. He may be very rough around the edges and crass with his verbiage, but he has a lot of things to say that make sense and provide us the reader with some tough food for thought. I’m entertained by his radio banter and intrigued by his views on black culture and society of today.

I’m also going to be continuing my study on the book of Ruth in the Bible. 🙂

That’s all for this month folks!
Happy Reading!