If you have been following social media at all this week, you may have seen an uproar taking place over a picture on the H&M UK website for one of their campaigns.

The picture was for a kids campaign and the 2 pictures that were in question was of a Caucasian boy wearing a sweater which read “Mangrove Jungle Survival Expert”  and another featuring a boy of African descent wearing a sweater that read, “Coolest Monkey in the Jungle….. Yeah… here, take a look for yourself :

I must admit, at first glance I was EXTREMELY offended. Being black all my life(lol) and of dark complexion , I have been referred to as a monkey more times than I would like to admit. I can remember being in elementary school where a white child told me ” to go back to Africa you black monkey”. So naturally, when I saw this campaign with this beautiful black boy in a shirt labelling him as a monkey, my emotions were riding high! I was totally on the ” I’m never shopping at H&M again “( and I LOVE me some H&M) train.

But then this morning, my friend posted something on her instagram story that caused me to look at this situation from a different perspective. Here’s how I’m looking at it now:

Let’s face it, lots of children’s clothing are animal themed. Particularly boys clothing tend to gravitate animal themes. We see this in many stores not only H&M.

Had the boys in the campaign switched sweaters , would this have even been an issue? I doubt it. The fact that in this racially sensitive era, nobody caught this  blunder is what really irks me. That shows me that H &M does not have racially diverse people working at upper management levels, or  that if they do, these said people aren’t “woke” enough to understand that putting a little black boy in a monkey shirt wasn’t the greatest of ideas.

I’m not a mother, but I have nephews and godsons of whom I would never purchase or put this particular shirt on, but that’s just me. I spoke to a couple of mothers( black and white)  today just to get a feel on what they thought of this whole situation. The first white mother I spoke to was absolutely disgusted. She thought it was incredibly racist and ignorant on H&M’s part. This mother however, grew up around black people, in a black neighbourhood  and so she has an understanding of how this would upset black people.
Another white mother I spoke to saw nothing wrong with the photo and even said ” he looks cute”. When I broke it down to her, she still didn’t seem to find anything wrong with it. I can’t blame her for that though. She’s never experienced any racial injustice, nor paid attention to any injustice happening around the world .
Both black mothers I spoke to however, thought the photo was insensitive.  My best friend  ( and the mother of one of my godsons)  brought up a good point. She put the onus back on the parents to say something. I mean believe you get to see the pictures before they go to print right? So why didn’t the parents say anything before the final product went out?…

I say all this to say, I’m not boycotting H&M because if I do that , I’m saying that people aren’t allowed to make mistakes; even racially insensitive ones. A mistake is something that happens once and to the best of my knowledge until a few days ago,H&M was guiltless .I mean, his own mother allegedly didn’t seem to have a problem with the photo ( see article here)  After reading this article, I do  think she didn’t say anything about it to protect a healthy  H&M pay check  though…. now that’s not cool.  Condemn a company for one mistake? No.  But sell out your child for some coins?? Now thats foul!

With that being said, what are we as consumers going to do to teach these corporations about race sensitivity? Okay, we can stop buying their product but what does that teach them other than that  being ignorant will hit you in the pockets? I’d rather hit them in the mind and help them get “woke”.  If then, they decide not to change how they run their business, by all means they deserve to be boycotted, But one mistake and #blackpeople everywhere are ready to burn them at the stake.  H&M has apologized:

Let’s continue to have dialogue that brings about a conversation of change and let us as adults be mindful of what choose to support ,but keep in a mind that one mistake should not be the be all to end all… Let’s not let our emotion cloud our thorough thoughts.

This is strictly my opinion, You are totally entitled to your own, I just wanted to share! Have an amazing day!
xoxo
©justlovethemanyway2018 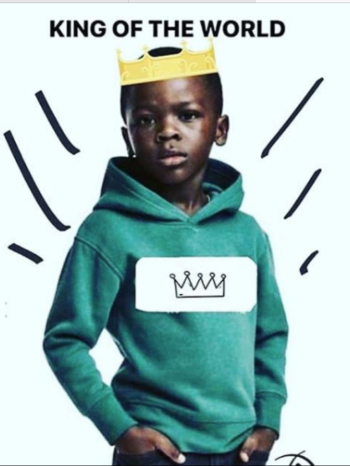 New post live now on the blog! Justlovethemanyway.com #blogger #faithblogger #christianblogger #lifestyleblogger #lifestyle #blog #canadianblogger #blackbloggers
-Year 36 #birthday #blessedandgrateful
Hello September ! It’s officially the best month of the year😊 #birthmonth
… I will remain confident in this I will see the goodness of the Lord …
been one year since I released “Who God Says I Am”. My what a journey it’s taken me on!
New post on the blog !