Disclaimer: All opinions are my own. I am not affiliated with State & Main.

I’m back again with another edition of my food files. Awhile back, a new restaurant opened up in my city called State & Main Kitchen and Bar.(It is actually a Canadian chain of restaurants I became aware as I researched it) I visited this restaurant with a good friend of mine( heyyy Jess)  on a beautiful Wednesday evening. The skies were bright, the temperature perfect, so we decided to sit on the patio. ( Side note: As soon as we finished eating, the skies opened up and began to downpour! we got inside just in the nick of time) This was a restaurant that I had never been to before but Jess had and had nothing but great things to say about it. So I tried it out.

I absolutely LOVED this place. The inside of the restaurant has a cozy yet chic atmosphere. You could go here for a family meal, date night or for a fun night out with friends or co workers.  The patio space was also really nice. It was actually quite a large outdoor space furnished with umbrellas, lights and what appeared to be heaters ( since its August there was really no need for us to use heaters.)

The menu was  awesome. So many things to choose from. It took us a really long time to decide what we wanted ( shout out to our sever, she was so patient with us) What I really liked about this place is that you can adapt your order to your specifications. I know about places gripe about making substitutions , but this place did not.

I ultimately settled on  the BUFFALO CHICKEN CHEESE STEAK which consists of:

The nutritional details are:

CAL730
FAT36g
SAT FATS14g
TRANS FAT.5g
CHOL135mg
CARBS47g
FIBER3g
PROTEIN48g
SODIUM2190mg
NOTESIncludes sandwich in its entirety, side dishes not included
I modified my sandwich and instead of having this on a white bun, I substituted the bun for a red tortilla wrap,  You get a choice of two sides and I chose the jalapeno cheddar  mashed potatoes  ( Absolutely divine) and a ceaser salad. I also ordered a drink. I originally ordered a drink that I did not like and my gracious friend switched with me so I didn’t have to send it back. She had a pink lemonade with a twist . It was okay. Let’s just say if you’re looking for spectacular drinks, this is not the place ( my opinion)
I really enjoyed my food however. I couldn’t finish it so I packed it up and took it for lunch the following day! Just as good! 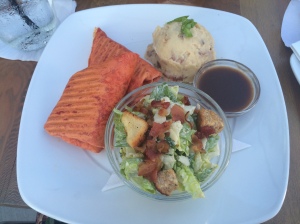 I would  totally recommend this restaurant to everybody! State & Main has locations in the following Canadian cities:

If you get a chance, check them out! You won’t be disappointed. 🙂

Till Next Time!!
xoxo